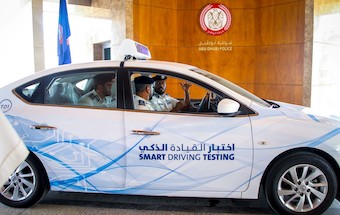 Abu Dhabi Police has launched a new era in driving test systems, using smart vehicles that use artificial intelligence to monitor and evaluate the driver’s performance.

The General Command of Abu Dhabi Police has unveiled the Smart Driving Test Project as part of its efforts to adopt the latest technologies, state news agency WAM reported.

Faris Khalaf Al Mazrouei, Commander-in-Chief, reviewed one of the project’s vehicles and its smart equipment and was also briefed by Colonel Mohammed Al Ameri, director of the Drivers and Vehicles Licencing Department of Central Operations, about the project’s importance in preventing traffic accidents.

The project will be implemented in three testing centres in Abu Dhabi, Al Ain and Al Dhafra.

They will use a total of 32 smart vehicles, including 19 automatic vehicles, 13 manual vehicles, and 28 buses, which are connected to the control and monitoring rooms by an advanced communication network, WAM added.