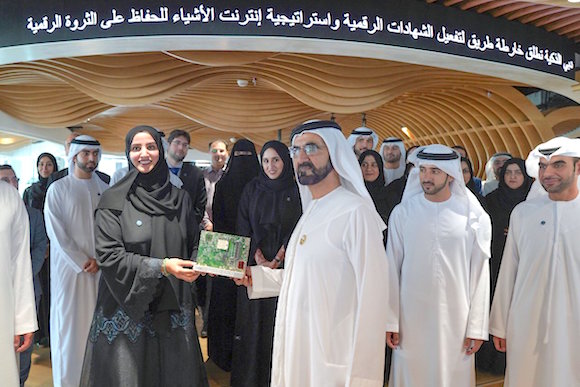 His Highness Sheikh Mohammed Bin Rashid Al Maktoum, Vice President and Prime Minister of the UAE and Ruler of Dubai, launched, from Smart Dubai’s headquarters at the Dubai Design District (d3), the flagship Dubai Internet of Things (IoT) Strategy, as well as the Data Wealth initiative to safeguard the emirate’s digital wealth and award the Dubai Digital Certificates to outstanding government and private entities.

“Dubai’s push to build the future today has helped establish a digital infrastructure that is now a strategic national asset in the wake of the Fourth Industrial Revolution,” said Sheikh Mohammed.

“It is a fortune that all stakeholders in the Dubai Government must work together to preserve. The Dubai Digital Certificates and the Dubai IoT Strategy mark the official launch of smart living in the emirate and we have directed all government institutions to cooperate and fully implement the initiatives by the year 2021.”

“The Dubai Digital Certificates are the benchmark against which all smart services in Dubai should be evaluated to preserve our Data Wealth,” Sheikh Mohammed further said, as he accepted the first Certificate presented by Dr Aisha Bint Butti Bin Bishr, Director-General of the Smart Dubai Office (SDO).

Meanwhile, Sheikh Hamdan Bin Mohammed took to Twitter to officially task Smart Dubai with leading the charge to preserve the emirate’s Data Wealth, calling on all government entities to embrace the Digital Certificates as part of their operations.

“Digital Certificates and the Internet of Things are essential to our plans of becoming a 100% paperless government by 2021.”

Dr. Aisha said: “We will be unveiling a comprehensive roadmap to guide the implementation of the Data Wealth initiative, the Dubai Digital Certificates and the Dubai IoT Strategy. We are thus setting the foundation for the emirate’s smart digital transformation, and taking another step towards a better life and promising future for our people.”

“Dubai stands out as a preferred destination for business, work and tourism,” Aisha continued, “which has transformed our society into a rich and diverse mix of cultures and nationalities. When we launched Smart Dubai three years ago, we sought to enable people to make use of the vast amounts of data generated every day in one of the busiest cities in the world. Today, as we launch the Dubai IoT Strategy, we provide the people of Dubai with an unmatched smart lifestyle. The Dubai Digital Certificates, on the other hand, safeguard our data wealth and provide greater safety and security. We are committed to working with our government and private-sector partners in Dubai to play our part in the UAE Centennial 2071.”

On a similar note, Younus Al Nasser, CEO of the Dubai Data Establishment, said: “A smart city’s achievement in terms of advanced technologies and smart solutions are a digital asset that cannot be fully utilised unless integrated into central data platforms that are consistently updated. The Dubai IoT Strategy unifies the data sources for the Dubai Pulse platform – Dubai’s digital backbone. The Strategy opens new prospects for growth, improving overall efficiency across all sectors and opening up unprecedented economic and social opportunities for people in Dubai. This while the Dubai Digital Certificates ensure that all efforts and initiatives align with the future we want for our city.”

Data Wealth consists of data, data-storing and processing technologies, smart-tech transformation, paperless transaction policies and systems (e.g. Blockchain), digital signature and ID, smart living and clean energy, among other elements. It consists of 121 smart initiatives, 200 databases and 1,129 smart services, and is expected to generate Dhs33.8 billion in three years’ time, as the Internet of Things reaches Dhs 17.9 billion in value by 2020. Meanwhile, open and shared data is expected to add Dhs 10.4 billion to the GDP by 2021, while Blockchain applications in government departments add Dhs 5.5 billion to the GDP by 2020.

The Dubai IoT Strategy seeks to build the world’s most advanced Internet of Things (IoT) ecosystem in the world’s smartest city to improve people’s lives. The strategy aims to protect Dubai’s digital wealth, encourage government departments to join the emirate’s smart transformation, and achieve the objectives of the Smart Dubai Plan 2021 to transition to a 100% paperless government.

The strategy is set to be implemented over four consecutive phases in the coming three years. The first phase centres around coordination of efforts and activities to implement IoT policies across government departments. Second, the Integration and Conversion phase, seeks to harmonise efforts towards implementing the IoT Strategy. After the third Optimisation phase, the strategies will go into the final “Blockchain Journey” stage, which will witness the full integration of IoT policies and the first ROI of the strategy. It covers six strategic domains: governance, management, acceleration, deployment, monetisation and security.

In addition to the Data Wealth initiative, the Certificates and the Dubai IoT Strategy, the Dubai Crowd initiative was also launched. It is the first technical project in the IoT Strategy, which seeks to manage and organise crowds in the emirate during peak seasons to ensure safety and security. Dubai is known for the massive crowds – some of the largest in the world – that flock to the city during high seasons, such as New Year’s Eve. Dubai Crowd analyses real-time data and suggests plausible scenarios for decision makers.

The Dubai IoT Strategy drives the emirate’s smart transformation forward as it strives to digitise more aspects of people’s everyday life, connecting them to the Dubai Pulse platform – the digital backbone of the smart city project. As more decision makers across various sectors gain access to information and insight to support their decision via Dubai Pulse, the strategy drives productivity and efficiency in the city and transforms countless industries, providing the tools everybody needs to drive sustainable change and improvements.