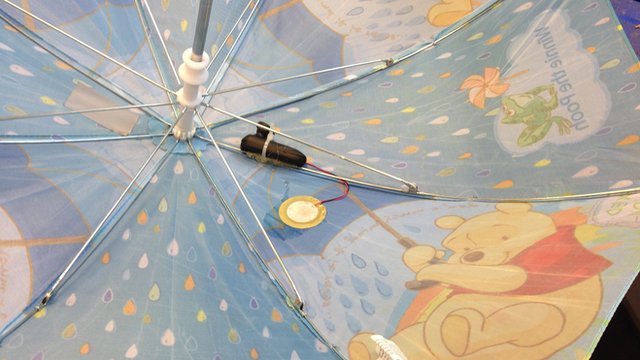 How would you fancy being a mobile weather station?

Rolf Hut, from Delft University of Technology in The Netherlands, plans to turn our umbrellas into rain gauges.

His prototype smart brolly has a sensor that detects raindrops falling on its canvas, and uses bluetooth to send this information via a phone to a computer.

Dr Hut envisages thousands of us crowdsourcing data for the researchers who have come to rely on an ever dwindling number of scientific gauges.

"We have radar and satellites, but we're not measuring rain on the ground as we used to; it's expensive to maintain the gauges.

"Therefore, agencies are reducing the number, and that's a problem for people who do operational water management or do research into hydrology because they don't have the access to the data they used to," he told BBC News.

Dr Hut was showing off his rough-and-ready prototype here in Vienna at the European Geosciences Union (EGU) General Assembly.

The child's Winnie The Pooh brolly incorporates all off-the-shelf components.

A piezo sensor stuck under the canvas measures the vibrations caused by falling raindrops.

This is wired into a 20-euro mobile-phone Bluetooth-earpiece, which dumps its information into an app. The smartphone then links all its data over the cell network to a laptop.

Experiments in the lab and in Dr Hut's back yard during a light shower have delivered some encouraging results. He is getting a reasonable correlation with a proper rain gauge sitting alongside.

It certainly seems worthwhile to persevere with the idea, he says, even if the development road ahead is a long one.

"Eventually every umbrella would come with this technology, or at least premium umbrellas would. And if you wanted to be involved, the moment you opened the umbrella, it would start sending data to your phone which uploads it to the cloud. 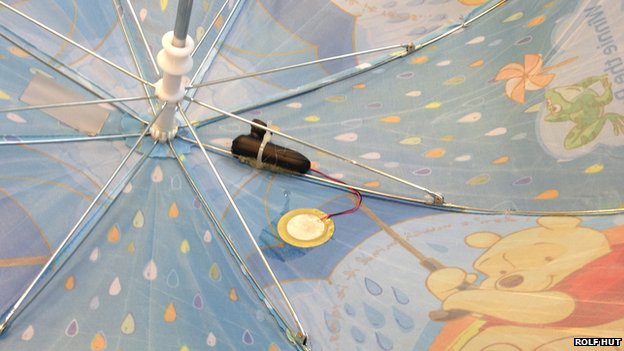 Off-the-shelf components: The piezo disc is taped under the canvas and wired into the bluetooth device

This crowdsourcing idea is not unique. Other groups are looking to do something very similar with the smart windscreens on modern cars that automatically set off the wipers when they detect rain, and even adjust the speed of the wipers depending on how heavy the downfall becomes.

The number of scientific rain gauges on Earth is a shockingly low number, says Dr Chris Kidd from the US space agency (Nasa).

He assessed their availability in a presentation at EGU.

Basically, if you were to combine the collecting area of all the instruments capable of providing near real-time data to the world's meteorological agencies, you would have trouble filling the centre circle of a soccer pitch. It is that bad. There are many thousands of gauges across the world, but getting at their information in a timely fashion is not always easy.

And although some of our radars and satellites have very sophisticated ways to measure rainfall, they need some "ground truth". The world's networks of surface gauges are part of that verification process.

Dr Kidd thought crowdsourcing options might play a role if the quality of their data could be assured, but he said there was no substitute for the properly calibrated scientific gauge.

"They are diminishing. And in developing countries particularly, this has a lot to do with cost," he explained.

"We need to look at ways to improve the networks. In the Sahel, for example, there's an interesting project where they're paying farmers for the data, and to make sure the rain gauge keeps operating. These farmers also get paid for the quality of the data. In this way, they are invested in the gauge."